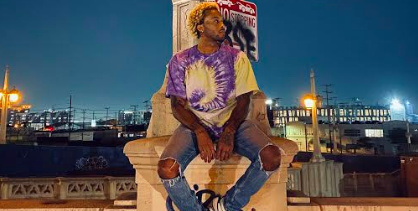 South Central LA artist, Cutty Cortez, is bringing a mix of Hip-Hop, Rap, Rock, and R&B sounds to the music scene. Although Cutty Cortez is able to bring upbeat bangers to the table, he also creates music that’ll make you want to cruise down the highway enjoying the views with your crew. Cutty Cortez’s passion is music because of the way that it has made him feel, and the way that he is able to make others feel. He says, “People get to really see who you are on the inside.”

The independent artist is inspired by the rough neighborhood he grew up in because he was exposed to many things than he should have been. He explains, “Growing up in the hood you’re always influenced by music. I was in the street life heavy. So you write about what you see or have gone threw. When you grow in a rough environment you become a product of it if you allow it and I allowed it and accepted it with no pump faking.”

While some up and coming artists would rather not be compared to known, big-name artists, Cutty Cortez takes being compared as a compliment.He has been compared to Nas, Drake, Yo Gotti, and The Weeknd, which makes him feel that he is on the path to greatness because they’ve all been Grammy-nominated artists.

Cutty Cortez has been in the game since 2013, dropping his first album under his name, Maurion. Throughout the years, he continued to drop EPs and singles under that same name, until 2020. After he dropped his last single, “Dreams,” he switched his name to Cutty Cortez and dropped, “Polo,” an EP titled, “Blue,” and his most recent single, “Draco.”

Cutty Cortez is currently cooking up some more projects, and also teamed up with EDM music group, TWSTD ZOO, to release a new single. Cutty Cortez has performed at the Coast2Coast live showcase tour, multiple shows around Los Angeles, and plans to keep performing in 2021.