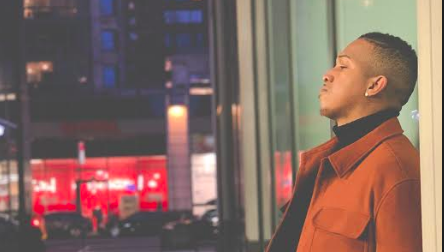 Savant Bleu is an up and coming soulful artist who is intellectual and teachable. The New York artist chose this name to better capture his personality and his knowledge of music. Savant Bleu writes all of his own music and looks up to artists such as Frank Ocean, Jasmine Sullivan, and John Mayer. Savant Bleu knew that he wanted to become an artist since performing at a Summer camp talent show at the age of 9, and has developed his voice and sound ever since.

People describe the independent artist’s genre as R&B, but Savant Bleu feels differently. He likes to consider himself as an R&B artist, but with a touch of Soul and Contemporary elements mixed in. As far as his sound, Savant Bleu describes it as, “…very electric, mellow, soulful. I’m driven off of tones and melodies. I like to hear my voice be parallel with guitar strings.”

When it comes to the impact Savant Bleu wants to make on the industry, he is adamant about using his music to create a fresh, new look on genres and categories. In his perspective, there are so many different sounds that go into making music, so it does not make sense to be placed in an umbrella category such as R&B, Hip-Hop, etc. Savant Bleu wishes to creatively impact the youth and his own generation. Jumping off of these ideas, Savant Bleu is no stranger to collaborations. He embodies the willingness to have no ceiling, which allows all others to be creative with him.

Savant Bleu has been compared to the great, Miguel, and also reminds people of artist, James Fauntleroy. This is easily heard in his first EP, titled, “Out the Bleu,” which contains 5 songs, with no features. This EP, along with singles, “Morning,” and “In Vain,” can be found on all major streaming platforms! Savant Bleu is also currently working on more singles for his upcoming EP.

Stay in touch with Savant Bleu through: