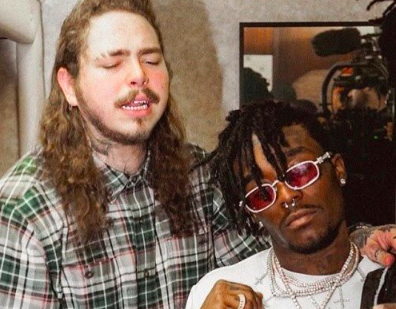 We know Posty has been working his a** off at home during this quarantine. Recently on April 24th, Post Malone performed in his home with Blink 182 drummer, Travis Barker, and bassist, Brian Lee, and guitarist, Nick Mack. With approval from Courtney Love, widow of Kurt Cobain, Post Malone raised over $500,000 for the Coronavirus relief by performing Nirvana songs on Youtube from his Salt Lake City home.

Aside from this, his manager Dre London also let us know that Post Malone has been working tirelessly on his new album that is set to come out the summer of this year. Dre also teased that fellow friend of Post Malone, Lil Uzi Vert, could be a possible collaboration on Posty’s new album!

His Instagram post reads: “I remember these two hustling from ground zero in 2015 To see the levels they’ve brought it to is amazing!! I know we got a lot of surprises on this next project, Maybe a Posty Vert idk. I just wanted to post this clip from memory lane!!”

After the success of his last album in 2019, Hollywood’s Bleeding, we can’t wait to see what Post Malone brings to the table this summer ’20!