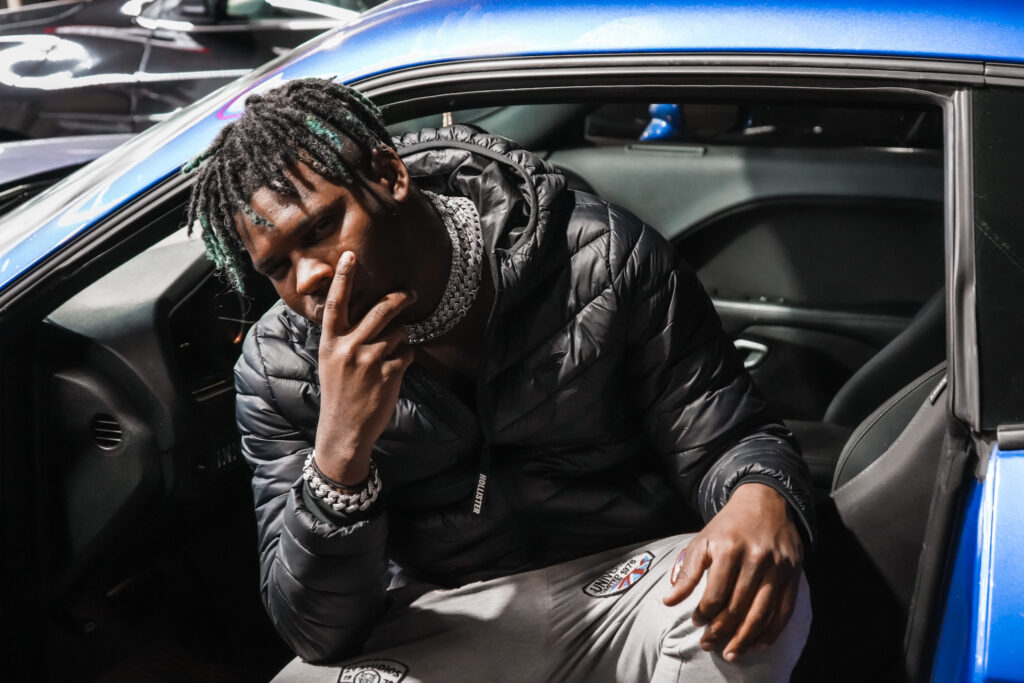 Meet 199X — an independent artist from Wichita, KS, who is now based in Los Angeles. He’s a talented artist who formally went by the name Ace Beretta. He underwent a name change and is now known as 199X because he didn’t want to box himself in.

Now, operating under the new moniker, 199X is ready to show people what he’s capable of. The artist released his project Kandyland recently and it serves as the perfect example of what he’s been able to accomplish thus far. With an original sound, clever bars, and unique melodies, 199X is definitely someone to be on the lookout for.

Keep reading to learn more about him!

Growing up I traveled a lot which is why I feel like I have a lot of different  layers to my music. I’m originally from Wichita, KS, but I spent a lot of my adolescence going back and for from Atlanta and Kansas in my high school years. Once I graduated high school I moved to Orlando for a year and then migrated to LA and I’ve been here ever since! ORLANDO taught me EVERYTHING! I cross paths or was around that whole wave of Florida artist who blew up, Tyla Yaweh, Wifi’s Funeral, XXX, Ski Mask, CASKEY, and many more… ORLANDO taught me this shit is real!

My real name is Marquis, but I go by 199X (as in 1990 X). I used to go by Ace Beretta, but I changed my name like 2 years ago when I realized what my destiny is! I am NOT just an artist, I produce for people, I song write for people, I am a successful CEO, anyone who knows me knows I am a better businessman than musician, but everything I do in the music world or business world is to push my generation forward! There’s companies I’ve started and music I’ve ghost written and or produced whether I got credit for it or not that has impacted the culture and I’m going to continue doing just that.

It’s tricky! I was first introduced to music when I was six. I had this anger management counselor who like taught me how to play drums at his church, but obviously growing up in Kansas its not like that was how I knew I was going to make it out the hood you know what I mean? We don’t see that shit we were hooping … Hooping like a MOTHERFUCKA. My mom is a phenomenal writer. She would take my brother and I to the studio when I was like 14. My bros and I would sneak to the studio behind her back, bring the gang, bring the weed and just go crazy for our boys you know? It wasn’t even to like trying to get famous; it was more so just therapy! I didn’t take it seriously til I was about like 17 or 18 that’s when I quit hooping and was like yo I can really do this shit!

Yeah most definitely! To be soo young, I’ve experienced a lot of life! The streets we come from that shit, I been in foster care, children home etc  I lived in 4 different states I seen soo much different culture, I went to like HOOD ASS SCHOOLS, but I also jugged my cousins address and was able to go to like one of the richest schools in the State… DIDN’T last long at all. I was too much for them, but I still had to learn how to adapt, how to survive in different environments, make new friends, made new enemies and a lot of different shit which I feel like helps me in my artistry! I relate to a lot of different people because I had to experience life from a lot of different perspectives. Sometimes I may be in my hood bag that some of my friends back home can relate too, but then other times I may be in my rockstar bag that may not be for some of my people, but I know this is what they are listening to on the other side of town.

I honestly don’t know! I don’t like to be boxed in, I just create the vibe! Only thing I focus on is telling my story and there’s so many different layers to that. One day you may get ROCKSTAR X, next day I may hit the studio and be in my RNB BAG, shit, they may wake up and I will drop an EDM album with Marshmallow and Skrillex. I can say that being a producer helps me a lot. I’m constantly searching for ways to push the culture forward with my production and I’m always floating on my own beats, so whatever my sound is every day I’m pushing it to be legendary.

To be honest, shit Tory Lanez, Kevin Gates, Mac Miller, Rich Homie Quan, Thugga … These were all artists who like I dead ass watch them blow up! I remember listening to Tory Lanez when he only was getting like 600 views on Youtube, I remember listening to Mac Miller when he was still cutting records in his parents basement I had to be in like 7th grade or some shit like that … But I watched them grow and championed all their success, so like when I really was having that thought of like yo are we going to do this foreal? I was like fuck it if they can do it I can do it … LET’S EAT! NO CAP! At that time I didn’t realize how much bulllshit went into the behind the scenes of it, but fuck it Im arriving everybody I just named I either met, been in the same room as or like got a mutual friend so they accessible! Kind of crazy once I sit back and think about it.

What’s one reason you are passionate about music and what inspires you!

Music is therapy! I’m just creative enough to make it rhyme! I’m not fueled by other people’s success, I’m only in competition with myself… I’m inspired by being the best version of me I can be! Like I said early I’m only here to tell my story as long as I keep living I’m always going to have a new story or experience to tell! This shit just fun as hell to be real with you! This shit feels like a big ass video game. Once I stop having fun with it I’m off this shit like its 2k or somethin’.

That’s something the world is going to have to wait to see! I will say I plan on doing a lot of things visually to show the world who 199X is and what I have to contribute to this generation, but everything else I plan y’all just going to have to tap in!