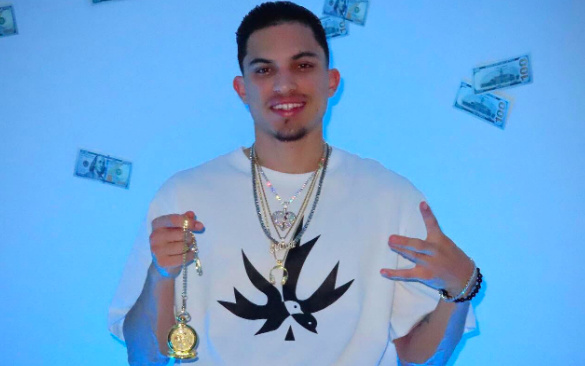 D’Rey is an Independent artist who truly believes in the power that the universe has to offer. Finishing what he started in the music industry is not what he wants to do, but what he is destined to do. D’Rey ultimately wants his music to have the ability to put people in better positions in life. With his lyrics, D’Rey wants to give people the realization that not only are they gifted, but help bring them out of their shell to express that gift even more. D’Rey has worked day in and day out to make a name for himself. He has created some significant goals for himself, including wanting to release 10 albums by the age of 28, create 10 RIAA Certified Platinum singles throughout the span of his career, and collaborate with hip-hop legend, Travis Scott.

Keep reading for more insight on the life and music of D’Rey!

How did you come up with your artist name?

I believe that we are all created in the image of kings and queens, based off, “The Word.” So, that is something to be cherished. Due to the fact that I have a son and a daughter, I do hold myself to a higher standard with full belief that we are royalty building a kingdom for our future generations to be able to learn from our past, without having to experience it. I wanted to come up with a way to call myself, “The King”, but in an unorthodox way. Since my name is Andre, I decided to keep the “Dre” part of my name, add a Y at the end, and separate the capital D with an apostrophe because in Spanish, “rey” stands for King. When you put it all together and it says, “The King,” with my name in it. D’Rey.

What is your genre, and how would you describe your sound?

My genre is hip-hop. I would describe my sound as true, and 420 friendly. My style is laid back with a side of professionalism. I’m usually rockin’ some Nike shorts and a t-shirt, but when it’s time for business, I suit up.

Aside from the vocals, do you write, engineer, or produce your own music?

I definitely write, produce, and engineer my own music, due to the fact that buying beats usually cuts into the cost of video production. I took some time off to get a better understanding of how to curate and format beats, so that I could rap over them and monetize my entire product after publishing. I have produced and published eight original singles so far, and I plan to build on my catalog as my journey continues.

When did you decide to pursue music more seriously?

I started rapping when I moved out to Carlsbad, NM. in 2015 with my younger brother, Lavoughn. Living with my grandma allowed us to fully discover ourselves since we didn’t have parental guidance. As you can imagine,we started smoking weed and thuggin’ out a bit. I was working at Wendy’s, so every time I got paid, I’d take $500 of my $700 dollar check and went straight to the plug! We never ran out of weed, so we never ran out of flows; but, once money did become an issue due to my blind ignorance, I figured, ‘Why not go all the way with this? What do I have to lose?’ 2017 is when I dedicated my life to building an empire for my family based on my art, and it has been the best decision of my life.

Who inspires your sound/music?

A lot of what inspires my music is pain I didn’t know how to deal with before this art form came about in my life, as well as seeing others I know who were in similar situations making better out of themselves. It hypes me up actually when I see people I know doing better. I get a sense of peace and confidence to finish a track I’ve been slacking on or come up with some new heat!

Why is music your passion?

I make music simply because it is my way to get out what i’m feeling without having to hear a response. The microphone is like your favorite dog you never had. It’s there to listen, remembers the words you say, and comforts you when you feel alone. When I first got to Cali, I was sleeping in the streets of Indio with no true direction, but I had a goal! When the evening would arrive, I’d go to a park, find an empty bench, open my laptop and get back to work on the beat I had started from the night before. I had 2 pairs of clothes that I was re-wearing each day, but switching the way I wore them, so that it didn’t seem like I was wearing the same outfit everyday when I would meet up with people. Not to mention, I was going through this with the constant ache in my heart knowing my son, Eli, and my daughter, Mia, were in Texas without me. I am very fortunate that I was born in the corrupt cycle of dysfunctionality in my family because that gives me the opportunity to break the chains my generations before me have been tied up in.

What projects are you currently working on?

I am currently working on a follow up single for, “Time Off” titled, “Statement” as well as another single with my younger brother, Rashawn KiiXX, titled “Up One.” Aside from that, I am building my first album, Aveon. It is about 50% complete and will consist of 10-15 songs.

Tell us what makes you stand out from other artists?

What makes me stand out is my ability to make moves with what I’ve got, no matter the circumstances. I do not tolerate excuses or complain about a task because that is energy I can put toward getting a job done. My lyrics are true and audibly legible. I have no reason to mumble, due to the fact that I want my message to be clear.

D’Rey wants to leave y’all with this message: “Excuse my language, but this sh*t ain’t easy, so buckle up and stay positive; but, most importantly, NEVER STOP! With consistency, you are already living the dream. Just build on it. Do not be afraid to leap when you are carrying faith.”

D’Rey’s “Time Off” is dropped TODAY on all streaming platforms. Don’t forget to tap in and watch the visual for it as well!