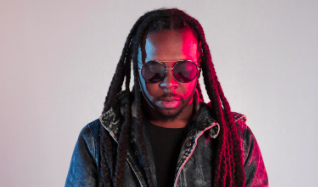 This standout artist out of Landover, Maryland not only raps, but can sing, and writes, engineers, and produces his own music. To add on to his list of talents, he is also trained in playing classical piano and the keyboard, and knows how to put a twist on Hip-Hop music by adding GoGo sounds. He also has a couple of huge accomplishments under his belt! He’s already collaborated on a single with XXL’s Freshman 2019 Class artist, Rico Nasty, and has opened up for PnB Rock at the Filmore in his home state of Maryland. He’s Bounce Back Black!

Bounce Beat Black keeps his GoGo roots close to his heart. Prior to branching off on his own, the artist was in a GoGo band under the nickname “Black.” He then put that nickname together with “Bounce Beat,” which is a certain style of GoGo music, to make his now stage name, Bounce Beat Black.

His sound consists of a mixture of singing and rapping, with GoGo influences tied in. Although he would categorize himself under Hip-Hop, Bounce Beat Black uses chants and hooks that resemble his GoGo sound, which keeps him apart from the way traditional verses and bars are portrayed in Hip-Hop music. The independent artist also uses autotune, and has been compared to legends, T-Pain and Juice WRLD.

and has also released two singles this 2020 named, “For You,” and “Catastrophe.” The artist plans to grow his fan base even more by releasing his debut album sometime early 2021!

Bounce Beat Black is working to be able to change the culture in the area he grew up in (DMV) by starting a trend of unity and changing the stigma in the area.